Ciara has formed as an extratropical low-pressure system southeast of the U.S. and moved further along the U.S. coast towards Canada. The storm rapidly intensified and moved quickly across the Atlantic Ocean towards Europe due to a strong current jet stream. The center of Ciara moved from Scotland towards the Norwegian coast during the night from Sunday to Monday and further east afterwards.

On Sunday, the intense storm Ciara (Sabine in Germany) caused numerous damages in Ireland, Great Britain and the Netherlands and rail and air traffic cancellations in parts of France, Belgium, Denmark and Germany. Wind gust speeds of 178 km/h at the Feldberg (Black Forest, Germany) and 144 km/h in Uetliberg (Switzerland) were recorded in the morning ahead and along the cold front, which is moving southeast.
Behind the cold front, the wind is weakening gradually, but it will remain stormy in Central Europe until the evening. On Tuesday the wind will further weaken and the weather remains rainy with cool temperatures in large parts of Europe. 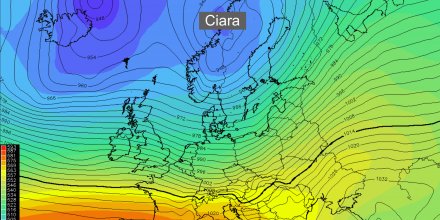 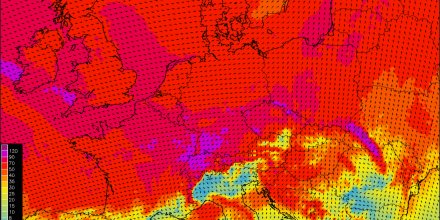